Who would go to Iceland in November? The summer is characterized by the midnight sun and beautiful weather. November, however, has about six hours of daylight, very good chances of grey skies, and is pretty freaking cold. So why did we decide to go then? Cheap plane tickets! I had some vacation days to burn before year ended (it’s a use it or lose it situation), so Gus and I decided to go to Iceland on a whim. For $300 round trip each, you couldn’t beat it! A trip to California would have been more than that. So we bought our tickets at work, and a month later we were landing in Reykjavik in the pitch black.

We landed in Reykjavik at around 6am, so we had the whole day ahead of us. After our flight landed, we went to the car rental place and picked up our car. I had no idea what the weather conditions would be like, so opted for a 4WD SUV, just in case we got stuck in the snow. Luckily enough, it never snowed (although it did rain quite a bit)!

We decided to do a self-guided golden circle tour today, minus Thingvellir National Park. We would be going there the next day to dive in between tectonic plates!

Our self-guided tour started at Geysir. The sun was just starting to rise at 10am, and the light was absolutely stunning. We hung out for a while and looked at the bubbling pots of water, and waited for the geysir to erupt a couple of times.

After we had our fill of hot water, we began the drive to Gulfoss (a giant, awesome waterfall). On the way there we found some adorable Icelandic horses! After spending some time with the horses, we continued on our way to Gulfoss.

Met some friendly Icelandic horses along the road!

The next stop wasn’t on any golden circle tour. It’s called Pjorsardalur, and my Lonely Planet book said it was a volcanic valley carved out by a river. The GPS dropped us off in the middle of what I guess was this valley?? We found a pile of volcanic looking rocks, and were the only people around. Definitely an interesting side stop… 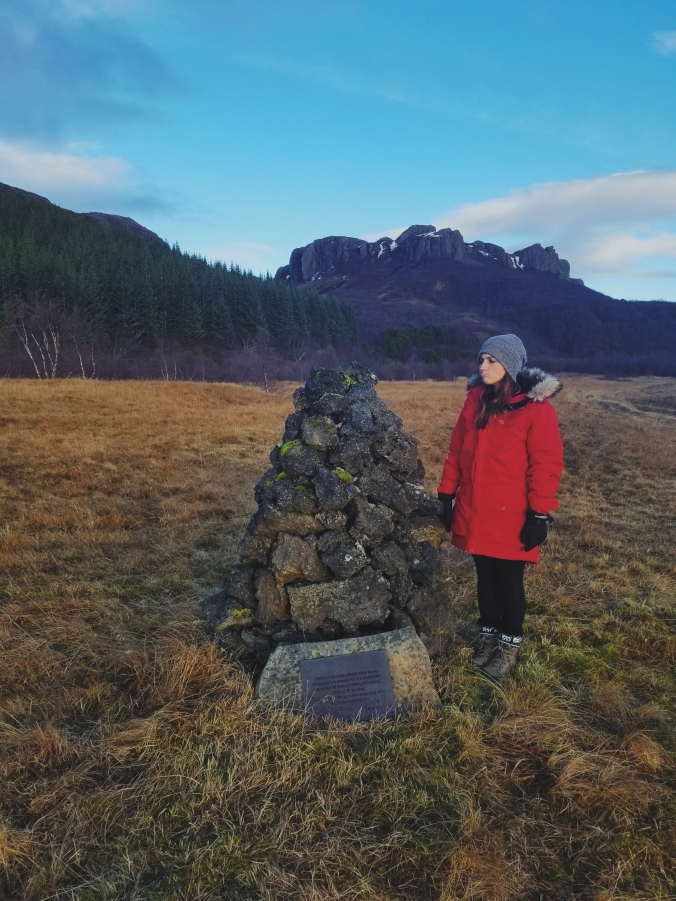 Did we find the right thing? Why is there a pile of rocks in a field with a plaque?

The last stop before heading back to Reykjavik was the Secret Lagoon in Fludir. It costs about $35 to enter, and is surrounded entirely by nature. It’s a beautiful way to end the day, and was perfect for our jetlagged bodies.

Once we got back to Reykjavic, we pushed through our exhaustion and decided to walk around the city at night. It’s a cute city, and reminds me of a giant Ikea. After some BOGO Christmas mules, it was time to go home and go to sleep!

Day two was all about diving Silfra. Silfra is a fissure between the North American and Eurasian tectonic plates, and is located in Thingvellir National Park. We decided to go with this tour company. They were very professional, and I would recommend their services in a heartbeat.

In order to dive Silfra, you need to have an open water diver certification and a specialty dry suit certification. We had gotten our certifications about a week before going, and it was totally fine! The water doesn’t get too deep in Silfra, so even if you’re not comfortable going deep in a dry suit, it’s definitely fine to do this dive. Each dive is about 20 minutes long, and you basically go through the fissure twice.

If you don’t want to fork out the cash for getting all these certifications, you can also go snorkeling. They only go out once in the fissure instead of twice. I would absolutely recommend snorkeling. The visibility is so amazing, so you can see everything even from the top of the water.

Although pricey, it’s a pretty cool experience to dive or snorkel in between two tectonic plates!

Such a cool experience to dive in Silfra. 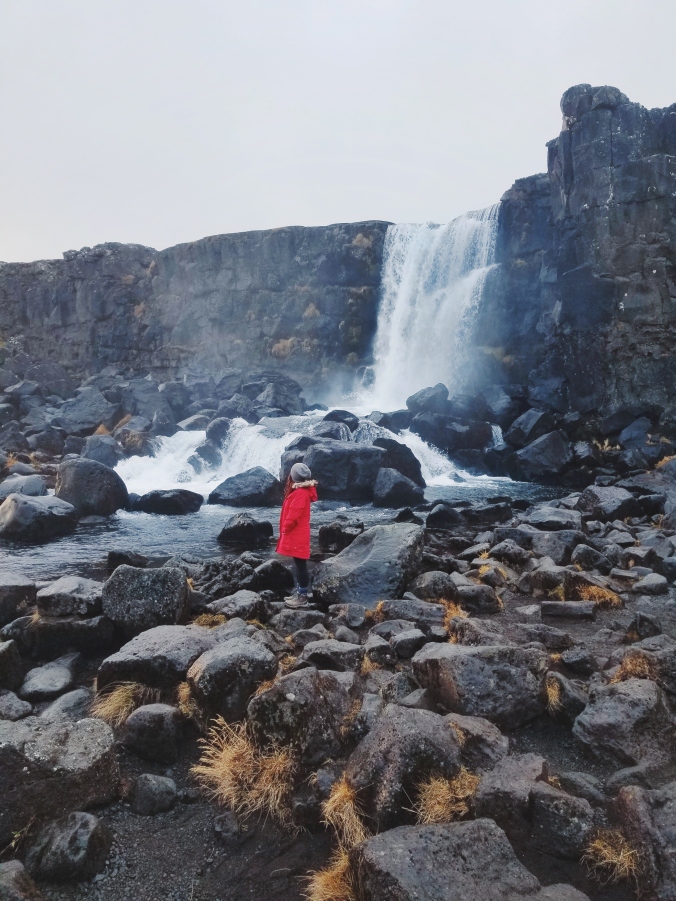 This had to be my favorite day of the whole trip. We got out of bed kind of late (we had a few too many drinks the night before…), and drove to Reykjadalur Valley. This valley is about an hour outside of Reykjavic, down the South Coast along the Ring Road. What’s so special about this valley is the geothermal river in it. You hike up about an hour into the mountains to this river. Once you arrive, there’s different water temperatures along different parts of the river. At the top is the hottest, and if you walk down a bit it gets to be more luke warm. It’s free to go to, and it was so amazing to soak in the hot river in the middle of the mountains (in the winter!). 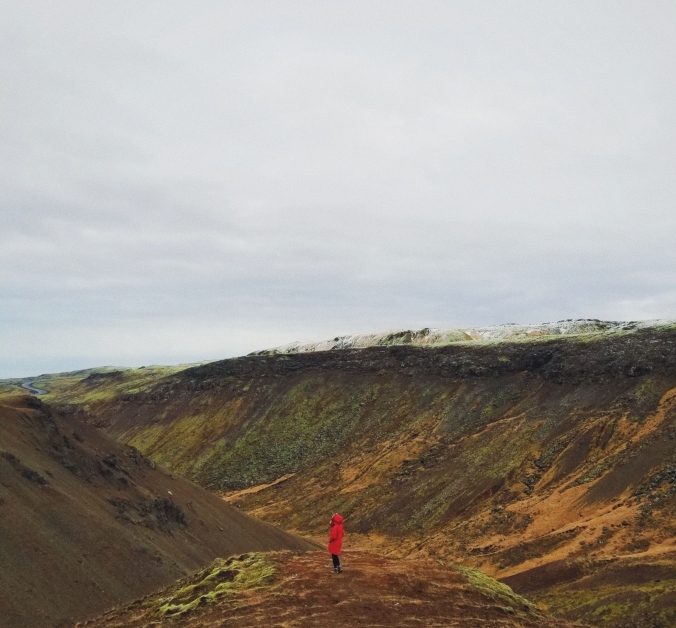 Some awesome views on our way up to the geothermal river.

After a quick bite to eat, we made our way to Vik (where we were spending the night). Seljalandsfoss was on the way, so we HAD to make a quick stop. I was very excited to see all these waterfalls!

After spending the night in Vik, we decided to chase some more waterfalls. Not too far was Skogafoss, which was absolutely beautiful and somehow very Scandinavian looking.

I then had the best idea to walk 45 minutes into the abyss to see an abandoned plane wreck. Honestly… this was not worth it. Maybe on a nicer day it would have been cooler because it’s by the water, but it was just so windy and cold and raining when we went. It was also being used as an instagram backdrop, so you had to navigate all the selfies. It would be a cool stop if it was right by the road, but it’s really not worth the long walk. 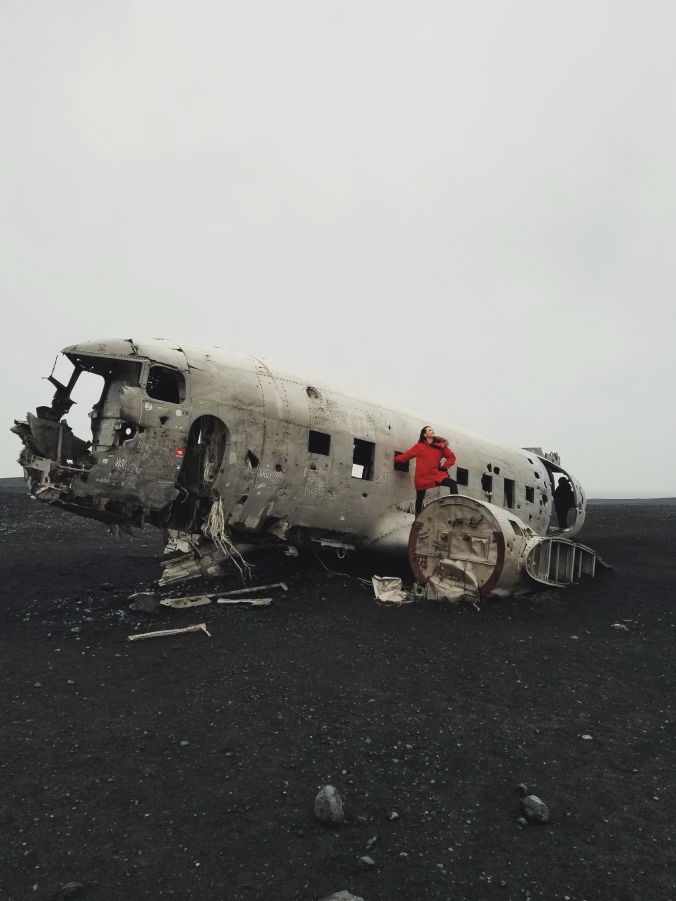 It was so windy… Everyone was hiding out inside the plane!

The last stop of the day was to Reynisdrangar. This is an epic black sand beach right in the town of Vik. We went and it was completely empty! Possibly due to the fact that it was raining and freezing, but that won’t stop us from adventuring on.

Now this was the biggest road trip day. We did a TON of driving. The first stop was to Fjadrargljufur, which is this epic canyon. We were the first ones there, so pretty much had the whole place to ourselves. The canyon has a trail with different outlooks. We only went to the first one and back, but there were options for longer hikes if that’s what you wanted.

The next stop was to the Skaftafell glacier. We wanted to see a waterfall, but getting up close and personal with a glacier was something I couldn’t miss. The glacier is a short hike from the visitors center, and you get pretty darn close. There’s also little lakes formed from melted glaciers, and glacial chunks hanging around. I even tried some! It definitely tasted like the last ice age.

The final stops were Jokusarlon and Diamond Beach. It was quite foggy, so we couldn’t see out very far in Jokusarlon, which is a glacial bay. However, on Diamond Beach you could see ice chunks waiting to go out to sea on a black sand beach. They look like actual diamonds! It’s touristy, but honestly something I wouldn’t want to miss seeing.

So should I go to Iceland in November?

Go for it! When I first bought tickets, I was nervous that there wasn’t going to be anything to do. With a good coat and a positive attitude, you can still see some cool things on the South Coast and around Reykjavic. If you’re lucky, you might even see the Norther lights! We didn’t venture anywhere else in case the weather got too bad, but this was plenty for our short, five day trip.

Also, rent a car! It was more expensive, but I really appreciated the freedom to do what we wanted. It also helped navigate the limited sunlight hours (about 6 hours a day). We made sure that we were on the road and able to use these hours to the fullest.