On our second day in Banff, we decided to spend the day around the Lake Louise area. We arrived at around 6:30am, again, to make sure that we had some sort of solitude before the masses showed up. We pulled up to the parking lot, and were greeted with a huge, ice blue lake surrounded by mountains. There were only about 15 people, so we had plenty of room to be super basic and take awesome photos by the lake.

This rock was quite the photo spot when we came back in the afternoon. There was a line of people waiting to take a photo!

That day we planned on doing the hike to the Plain of Six Glaciers tea house and the hike to the Lake Agnes tea house. It’s pretty common to do both in a day because you can just hop on the trail to the other one about halfway through backtracking back to Lake Louise. The Plain of Six Glaciers hike was supposed to be the easier one, and still exhausted from the day before, we decided to ease into the day by doing this one first.

It started off with a stroll along the lake. The path was very easy to walk on, and you could appreciate the blueness of the lake. Once you get to the other side, it starts to become more uphill, and you walk higher and higher into the mountains. Snowfields covered parts of the trail, but it wasn’t anything too difficult as long as you were wearing the right shoes (hiking boots, people!). The path follows a ridge along a valley, and Lake Louise is always in view behind you. The trail gets considerably steeper towards the end, and just about when you’re ready to quit, you arrive at the tea house!

The tea house is a log cabin with prayer flags hung around and a resident Irish wolfhound ready to play. We arrived around 9:30am, and were able to find a seat on the balcony for the four of us. We ordered tea, soup, and chili. Kind of an early lunch, but we couldn’t resist!

Our delicious meal at the Plain of Six Glaciers tea house. Everything was vegetarian!

Oh how I love tea…

After we finished our lunch (breakfast? brunch? who knows), we made our way to the Plain of Six Glaciers viewpoint. This viewpoint is only 1.5km from the tea house. It’s a crowded trail, so make sure to get all that tea out of your system BEFORE you start walking. There’s like zero privacy for those of us with small bladders. Zero.

The viewpoint takes about 20 minutes to get to from the tea house. You can see mountains and glacier paths off to the side, and Lake Louise in the front!

After sprinting back to the tea house to use the bathroom, we made our way back to jump on the trail to the Lake Agnes tea house. On our way back, we passed hordes of people making their way up to the tea houses. Again, so glad we went up there early. There was no chance of getting a table any later than we got there.

We found the fork in the road that led to Lake Agnes, and started to make our way up there. That hike was considerably harder. It was a lot steeper, but nonetheless a beautiful hike through the forest. You were able to see Lake Louise peak through the trees, and you really started to feel like you earned your lunch. The rain started to drizzle on us, so we hurried our butts over to the tea house.

We were hoping that because it was a harder hike, there would be less people. Boy, were we wrong. It was even more crowded than the Plain of Six Glaciers tea house (we really need to do research beforehand…). Standing in the rain, we didn’t decide to hang around for long. We still had a long way to go down the mountain. We did stay just to take a few pictures. I stuck with taking some photos of the lake. Alex on the other hand… he thought it would be awesome to stand on this log in the middle of the lake and strike a pose. He did a little bit, but not before he fell and soaked his boots in the freezing water.

A moody Lake Agnes. Pro tip: don’t stand on that tree in the lake unless you want your boots to get all soaked.

We hurried our way down (much to the dismay of our knees). The trail to get down was so so so crowded, so we wanted to get out of there as fast as possible. When we emerged from the trail, we saw swarms of people taking photos around the lake. We also saw people dressed in traditional Canadian wear (I think?). It was Canada day! 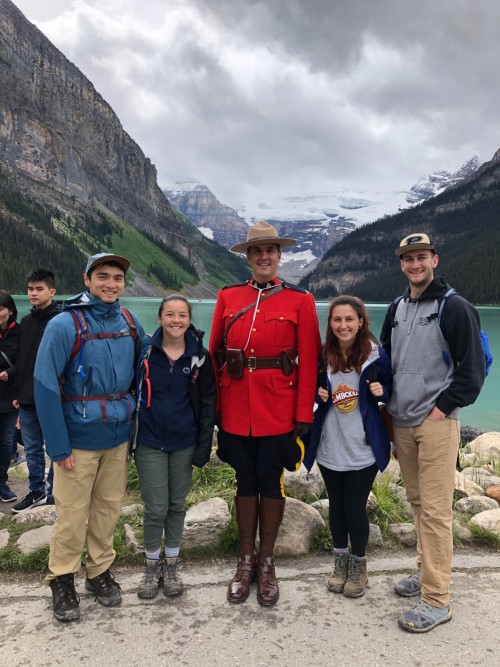 I couldn’t think of any better way to celebrate this country than by hiking around one of its most beautiful lakes and enjoy tea houses in the wilderness!